Fountains of Wayne’s new album, “Sky Full of Holes,” has great songs in a not-so-great order

So today I had to write a review of the new Fountains of Wayne CD, “Sky Full of Holes” because they didn’t get back to me in time for a profile and I needed to give them some press. This is my first music review and I was really nervous about it, but one of the editors at The Star-Ledger told me I did a good job and added my story to their main entertainment section, which makes me feel great!

See it as it appeared on NJ.com.

Fountains of Wayne’s new album, “Sky Full of Holes,” has great songs in a not-so-great order 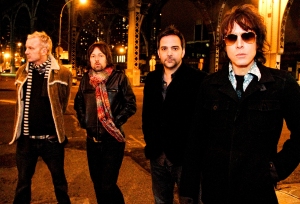 On July 21 and 22, New York City power pop/rock band Fountains of Wayne will perform a sold-out concert at Maxwell’s, 1039 Washington St., in Hoboken.

The quartet, best known for their 2003 hit “Stacy’s Mom,” is currently promoting their latest album, “Sky Full of Holes.”

The album, which was recorded in New York City, opens with the sunshiny, upbeat “The Summer Place,” a surf-rock tune with a riff straight from the “Hawaii Five-O” theme. The song – like many of the tracks on “Sky Full of Holes” – would be most at home getting crowds moving at summer outdoor concerts.

While the next track, “Richie and Ruben,” isn’t quite as high-energy as “The Summer Place,” its catchy beat and playful, storytelling lyrics make it just as fun – even though it’s about two mess-ups who blow through any money they can get and whose lives don’t amount to anything.

“Acela,” a country-rock inspired ditty, shows off the band’s rhyming abilities and love for playing with multiple sounds found in multiple syllables. It’s a pleasant-enough song, but it hits its climax only 1:30 minutes into the track, which is way too early for a song that is only 3:12 minutes long. Or maybe the real problem is that the song doesn’t go on long enough. 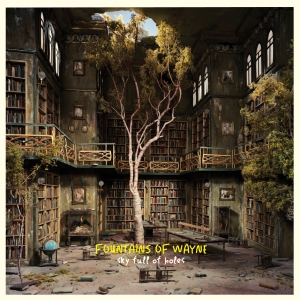 The cover of "Sky Full of Holes."

While all of the songs on the album are well-constructed and tuneful, many of them tend to sound the same. After a while, it’s hard to remember which song has which melody and was about what subject matter. Fortunately, “Cold Comfort Flowers” brings mellowness and a distinct, new direction halfway through the album. While the song is clearly an FOW song, its soft, swaying vocals, hard-rock-ballad-esque guitar solo and more controlled instrumental energy give it a different feel. After several songs that average about 3:40 minutes in length, however, this slow-tempo song may feel a little too long even though earlier tracks “Someone’s Gonna Break Your Heart” and “Action Hero” are both over 3:40 as well.

“A Road Song,” is a sweet, old-school-feeling song with clever references – often to contemporary things or figures like Will Ferrell (in a way that only seems anachronistic if you stop and think about it) – and is a great track in general. Unfortunately, it’s the first sign that the album is losing steam. Indeed, the next few tracks are almost aggravatingly slow and one can only wonder who decided to frontload the record with all the high-energy songs only to let it die midway.

Things finally pick up with track 11, “Radio Bar,” which is another good-time song that conjures up images of smiling people pulling up to the beach or local snack stand in convertibles, enjoying bottles of Coke. The All-American happiness is sure to wake you up in time for the album’s finale.

The next track is something you’d hear a man in the South or Wild West – somewhere where they wear cowboy hats – sing at the campfire while strumming an acoustic guitar. Probably one of the most aptly-named songs on the CD, “Firelight Waltz” is relaxing and relatively soft, but calms rather than bores. Having “Radio Bar” immediately before this song is probably the wisest song order choice made in the making of the album. 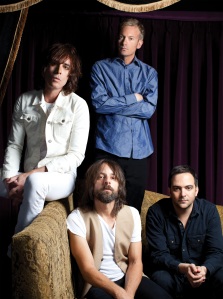 Closing track “Cemetery Guns” is a distinctively military-inspired elegy that sounds more patriotic than anything else on “Sky Full of Holes.” Unlike other “American” songs like, “I’m Proud to Be an American” by Lee Greenwood or our very own national anthem, however, “Cemetery Guns” is never saccharine sweet, corny or blindlessly pro-USA. It brings to mind the genuine devotion of soldiers to their country and the equally real admiration, respect and love they receive in return.

Overall, the album shows off FOW’s ability to create high-energy, melodic pop songs and makes it clear why the group continually receives positive views for their work. Their songs are compositionally excellent and have lyrics which their representatives accurately describe as “witty and wistful, imaginative and personal.”

The flow of the album, however, is thrown off by the marathon of lower-energy songs that follow its bombastic opening sequence. Fortunately, in the age of the mp3 player, most fans will probably end up listening to these tracks on shuffle or putting them on larger playlists to intermingle with songs from other artists. People will also probably selectively play individual songs based on their mood. In these situations, the quality of the songs will speak for itself and allow listeners to appreciate the band’s work overall.

“Sky Full of Holes” will be released on August 2 and will tour extensively in support of the new album, beginning with a string of US dates in August and September. For information about Fountains of Wayne, visit their website.

Listen to “Richie and Ruben” off Fountain of Wayne’s “Sky Full of Holes.”

Summer Dawn Hortillosa is a journalist specializing in arts and entertainment. Among other things, she is also an award-winning playwright, director, singer-songwriter and actress. Her work has been seen in The Jersey City Independent, The Jersey Journal and other publications.
View all posts by Summer Dawn Hortillosa →
This entry was posted in Journalism, Online and tagged @summer-dawn-hortillosa, fountains-of-wayne, sky-full-of-holes. Bookmark the permalink.

2 Responses to Fountains of Wayne’s new album, “Sky Full of Holes,” has great songs in a not-so-great order