I wrote the advance for the Mile Square Theatre production of the Tony Award-winning play, “God of Carnage,” in Hoboken and then went to see the show with my theater buddy Khier Casino.

Here is my review. (See it as it originally appeared on NJ.com.) 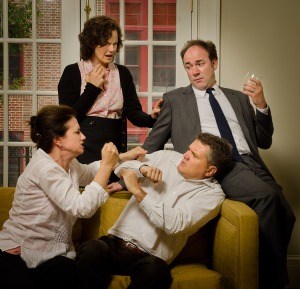 While the Tony-award winning play on the subject, “God of Carnage,” claims to only be about how society deals with bullying, the Mile Square Theatre production of the show in Hoboken gets to the root and nature of the behavior.

In the show, Michael and Veronica Novak (Charlie Kevin and Patricia Bailey) invite Alan and Annette Raleigh (Associate Artistic Director Matthew Lawler and Annie McAdams) to their home to discuss an incident between their children – in short, 11-year-old Benjamin Raleigh hit Henry Novak in the face with a stick and broke his teeth.

While the boys’ fight is certainly the reason for the two families coming together, it does not stay the subject for long. The parents’ personal issues – as couples at odds or spouses at odds – quickly take center stage, with espresso and “rum” (stage secret: it’s iced tea!) fueling the fire.

Each of the actors does a great job pushing the limits of their character while staying consistent and believable as caricatures of different parental attitudes. Bailey’s character, Veronica, never back down from her fight for the betterment of society. The irony of her screaming and yelling about how the issue should be handled in a civilized way isn’t lost on the audience, but Bailey never comes across as insincere.

Kevin, on the other hand, is a man trapped between being himself even when it means “portraying himself in a negative light” and pretending to be happy. As the couples’ well-intentioned discussion unravels into a fiery power struggle, we find out that Michael thinks getting married and having kids is a terrible fate. In a talk-back after the play, one audience member said he most strongly related to Michael who was always “blamed for everything” – the “murder” of his daughter’s hamster, difficulties in the Novak marriage and more.

Lawler shines as lawyer Alan, whose ever-ringing cell phone and obvious lack of concern should irritate the audience as much as it does the other parents. Lawler wins the crowd over with his charm and smooth delivery, however, getting laughs and endearing himself to the audience as the attorney who, ironically, doesn’t mince words or pretend to be anything but himself.

McAdams’s role is easily the most challenging, spanning a large range of emotions – she starts out amiable and soft, spills her guts (so to speak), and then becomes brave enough to stand up for her son’s “hooligan” actions, put an end to her husband’s endless telephone calls and tell the Novaks what she really thinks of them. In the end, she is the epitome of – as her character says – a “desperate” woman.

The audience was mesmerized at last night’s performance by the hilarious results of the battle between politeness and sincerity and by the constantly switching alliances – men vs. women, couple vs., couple, spouse vs. spouse.

Director Chris O’Connor, who is married to McAdams, noted in the play’s program, “It’s been very interesting to work on a play together that has marriage and children as central themes.”

After the show, as BullyingStinks.com founder Tracy Echikson spoke with the audience, several members discussed their thoughts on bullying and admitted being bullied, watching someone be bullied and even being the bully. Echikson pointed out that as the parents peaceful discussion turned into a tulip-throwing, book-destroying, scream-filled rumble, it became clear that Benjamin Novak was not the bully in this play.

“The incident in this play – a boy knocking another boy’s teeth out with a stick – is not bullying,” she said. “Bullying is a repeated behavior. Here, the parents were bullies – it was repeated and they were psychologically tormented by what was going on.”

Echikson is just one of many to sit in after the shows – psychologists and others have also shown up to talk about bullying and the play.

Overall, O’Connor’s keen pacing and the actors’ passionate performances were surprisingly organic and made the play a brilliant study of the emotions behind people’s reactions to conflict.

“God of Carnage” will be performed through Oct. 23 on Thursdays and Fridays at 8 p.m., Saturdays at 3 p.m. and 8 p.m. and Sundays at 3 p.m. Tickets are $25, $15 for students and seniors. For tickets and more information, visit MileSquareTheatre.org.

Summer Dawn Hortillosa is a journalist specializing in arts and entertainment. Among other things, she is also an award-winning playwright, director, singer-songwriter and actress. Her work has been seen in The Jersey City Independent, The Jersey Journal and other publications.
View all posts by Summer Dawn Hortillosa →
This entry was posted in Plays, Reviews, Theater and tagged @summer-dawn-hortillosa, @the-jersey-journal, god-of-carnage, mile-square-theatre. Bookmark the permalink.